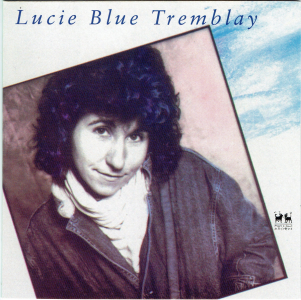 The debut album by Montreal folk singer-songwriter Lucie Blue Tremblay features five songs sung in English, and five sung in French; the first side of the album contains studio recordings, while the second side is an excerpt from a live concert in San Francisco recorded the year before. There’s a noticeable difference in the technical quality of the studio recordings vs. the live recordings, which makes the second side a little less engaging than the first (although the side opener, a translated cover of Ferron’s “Ain’t Life A Brook”, is the album highlight.)

The opener of the A-side (“Magic of Love”) is another strong track. The album’s most conspicuous misstep is “Voix d’Enfant”, a song which tackles the difficult subject of incest, but pulls its punches, leaving us with lyrics that are weepy but insubstantial.