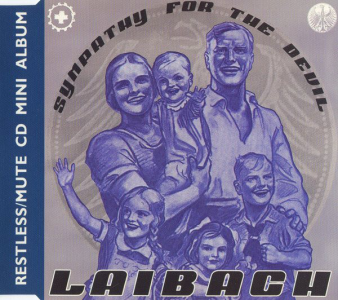 From time to time, I’ll pick up a CD by a band I don’t really know, just based on their reputation, or because someone I knew recommended them. Sometimes, these adventures prove to be very fruitful, sometimes not. Laibach was somewhere in the middle. I sorta get them.

This disc (labeled a “Restless/Mute CD Mini Album” on the cover) was a cheap introduction to the band and their side projects. There are six twisted covers of the famous Rolling Stones track. (The international release has two additional instrumental covers, but we didn’t get those here in the US.)

I can’t tell whether the first track is really the best of them or if I’m just surfeited by the time it’s over and not as receptive to the other five versions. As Laibach covers go, it’s a relatively straightforward reading — albeit sung entirely in industrial growl at a dirge pace. The coda at the end, when the percussion finally relents around 5:16, is actually rather pretty.

The second track introduces German lyrics, some John F. Kennedy samples, and has the familiar “woo-woo”s running in the background, but it’s way too busy and never really goes anywhere. The third track, titled “Sympathy For The Devil (Anastasia)” is credited to Laibach instead of Jagger/Richards, and is mostly instrumental with a few vocal samples thrown in.

The fourth track is a collaboration between Laibach and vocalist Anja Rupel. The female vocals are a nice contrast at this point, but she doesn’t really bring her A-game, and the second half of the track is a mish-mash of drug-themed samples from the “Sympathy For The Devil” film. Tracks 5 and 6 are nothing new, the latter being an extended version of the opening track.

Listening to the mini-album feels to me like hearing a joke that’s been translated into another language — it almost works, but not quite.